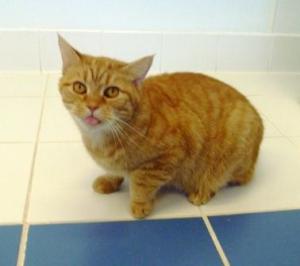 The first week in September, Garfield (temporarily named Sweet Potato in honor of the holiday) arrived at our Sanctuary. He was one of a number of cats we accepted when Angel’s Gate Animal Hospice was forced to close. He was one of several feline leukemia positive cats. In accordance with our admission protocol, Garfield was again tested for FIV/FeLV. When he tested negative we were surprised and further inquired into his status. We were assured that he was indeed FeLV positive and had been living in a FeLV environment for several years. We waited for about six weeks and then re-tested him utilizing the IFA test (Indirect immunofluorescent antibody). As this test must be sent to a laboratory, we waited several days for the results. We were astonished when the results came back negative. The final step was to again snap test (ELISA test) Garfield after he had been here for over 60 days. We did this on Thursday and, yes, it’s true, Garfield is negative. We assume that a long time ago he tested positive but was never re-tested until he came to us. He obviously fought off this dreadful virus and must have the world’s strongest immune system as he did not contract the virus in subsequent years. This Sweet Potato is a fabulous and super friendly feline. Although he is about eight years old, he acts like a kitten and we hope someone will give him a very special forever home. Miracles like Garfield do not come along everyday, and this is one very special reason for us to be thankful this Thanksgiving Day.